If there is one thing that I learnt from the one day trip that we planned to Mahabaleshwar last weekend, it is not to plan any trips to the popular destinations during the festive season or long weekends. It is just a waste of time and effort, not to mention the petrol that is burnt by waiting for minutes and sometimes even hours together, for the traffic to move a few (read 2-3) kilometers.. Yes, that is exactly what happened to us last weekend. We planned for a one day trip to Mahabaleshwar and started as early as 8 am (as we could :)) from Pune.

We stopped for a quick breakfast at one of the many Vithal Kamat restaurants that don the Pune-Bangalore highway. But as this weekend was just two days after Diwali and since the schools were closed for these two weeks, it was just a throng of people everywhere. What was planned as a pitstop turned out to be a long wait of nearly an hour of breakfasting for us. Lessons learnt, always pack food when you are on a short trip as this saves a lot of time and helps you to cover more places in a day ;)

Though there were more vehicles (cars) plying than usual, the traffic up till Wai was smooth. We even rode up the ghat road in the normal pace. But just about five kilometers before reaching Panchgani, the traffic almost came to a standstill. It took us nearly half an hour to move two kilometers and Google Map was showing even worse traffic ahead. It showed nearly 2 hours to reach the Mapro Gardens in Mahabaleshwar which was just 15 kilometers from where we were. That is when we decided to take a detour and visit the Table Land in Panchgani (Satara district of Maharashtra).

A table land is nothing but a plateau or to put it even more simpler, is a mountain with a flat top. That is what this table land in Panchgani is too. It is a vast expanse (around 6 km) of flat laterite rock surrounded by hills. It is the highest point in Panchgani and this volcanic plateau is Asia's second longest mountain plateau after Tibetan plateau. The table land offers an aerial view of Panchgani and the valleys nearby. You need to pay a pollution tax of Rs 50 (for car) for the entry to Panchagni and.... 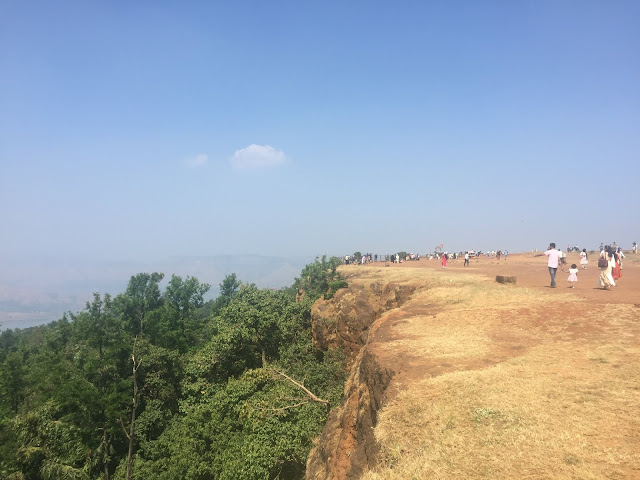 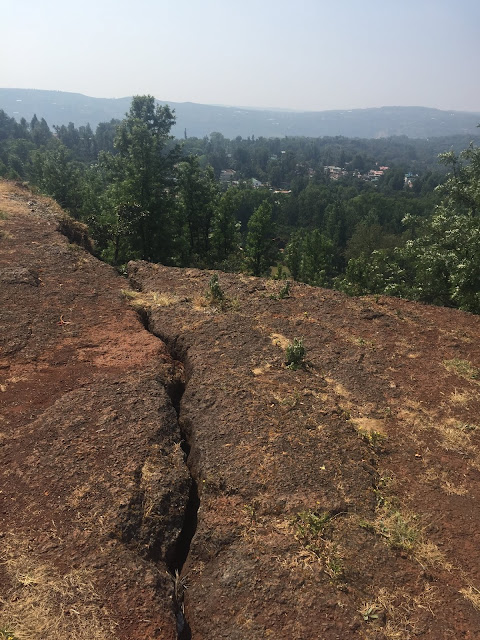 This place is much hyped coz of some of the Bollywood movies like Taare Zameen Par, Raja Hindustani and many more that were shot here. You can spend a decent 30-45 minutes here walking to the far end or the other side of the plateau. During the day time it is a bit hot and can be a little uncomfy walking in the plateau. But I have read in some other blogs that a walk through the plateau in the evening is very pleasant and watching the sunset from here is also a nice sight. 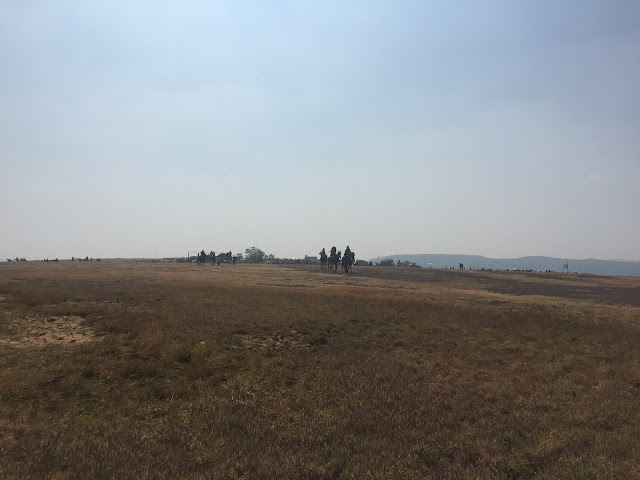 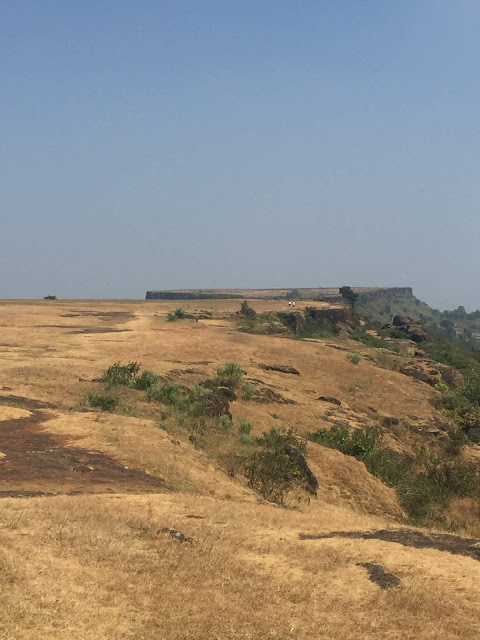 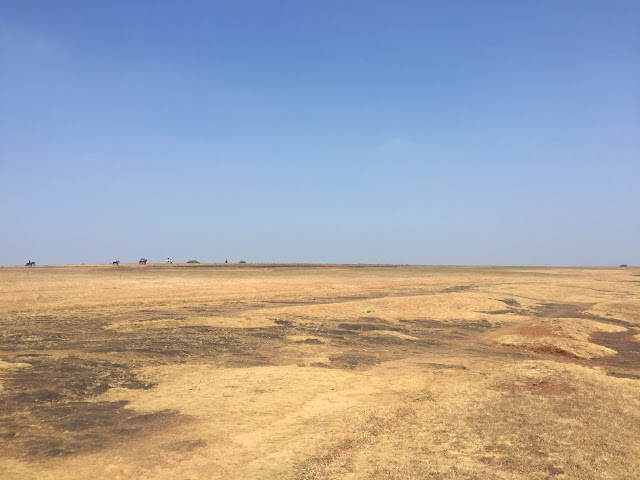 Horse riding is quite famous here but if you are travelling with kids I suggest you to be little more careful as we ourselves saw a father-daughter duo fall off from the horse while they were trying to ride the horse. Also a few years back, a girl was killed in an accident as the horse carriage fell off the table land and horse riding was banned here for a while, back in 2012. 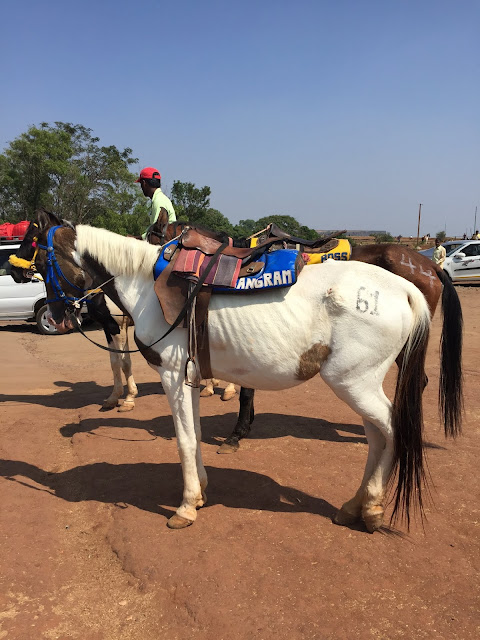 We spent around 1 1/2 to 2 hours here in Table land walking through the plateau, clicking pics and having some tender coconut and all. Then we started back to see if the traffic had become better and if we could reach Mahabaleshwar. But it was as worse as before and we saw that the return traffic was also getting equally worse and so we started back to Pune. We rode down the Ghat and reached Wai and stopped there to have lunch.

It was then that we decided to visit Nana Phadnavis Wada in Menawali. Menawali village is just about 3 kilometers from Wai. Nana Phadnavis, an influential statesman of the Maratha empire, settled here in this village in the late 18th century and built his large residence on the banks of the Krishna river. It has a Wada (mansion with an inner courtyard), a Ghat (steps leading from the mansion to the Krishna river) and two temples, one dedicated to Lord Shiva (Meneshwar) and another to Lord Vishnu. 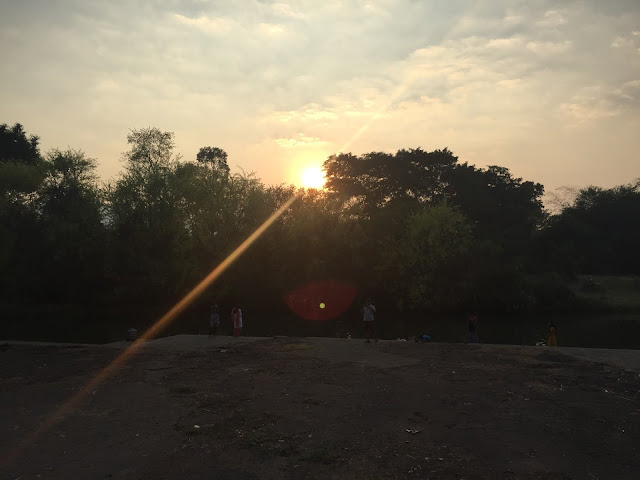 This place became quite famous as many Bollywood movies like Swades, Dabaang, Bajirao Mastani were shot  here. It is a beautiful location but not at all maintained. It was quite a feat to cross the dirty water and reach the Shiva temple in the Menwali (Krishna) Ghat. You then ascend some steps to reach the landing of the Shiva temple and again descend some steps (It was quite dark and we had to use mobile light to find our way down) to reach the Shiv Linga below. 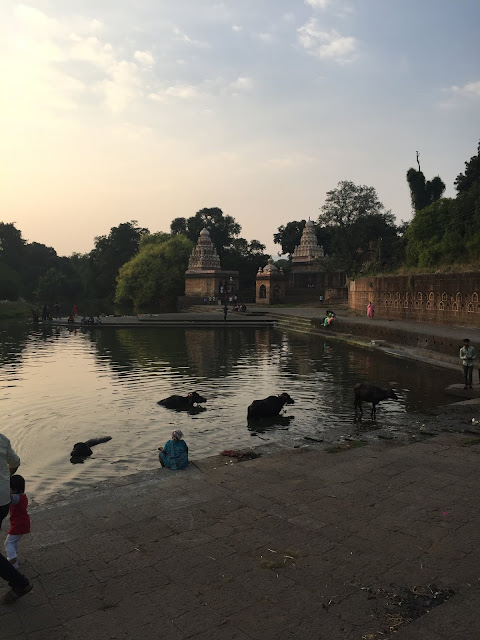 You will never realise that there is such a beautiful (yet very poorly maintained) place when you ride through the village (but looks more like a town). We parked our car in a small open ground and walked around what looked like the backyard of some houses and landed upon the Menwali Ghat (steps). We did not enter the Wada but spent around 30-40 minutes visiting the Shiva temple and clicking pics and checking around :) 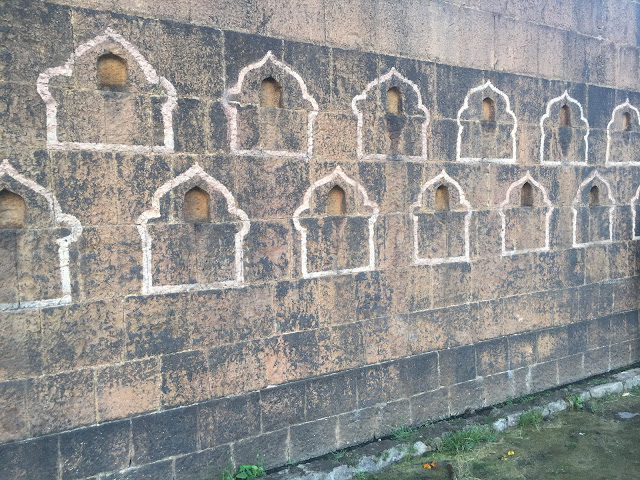 It was close to 6 pm by the time we were done with the wada and so decided to get back home as we did not want to get stuck in the traffic again :) If you plan to visit on a normal weekend when the traffic is less, there are many more places to be visited in Panchgani. Maybe some other time when possible. Hope you enjoyed reading what we did when our plan to visit Mahabaleshwar went south :) Till next time when I'm back with my practical travels..

Posted by Chitz at 13:11
Email ThisBlogThis!Share to TwitterShare to FacebookShare to Pinterest
Labels: Mahabaleshwar, Maharashtra travel, Panchgani, Satara, Things to do around Pune, Travel, Wai