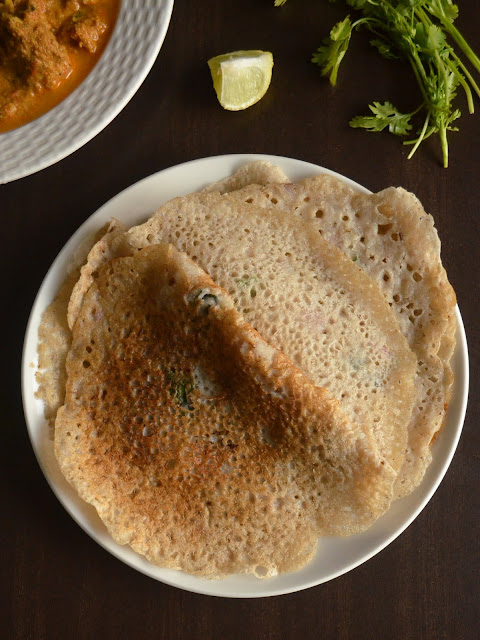 I am a breakfast lover.. Are you? I wasn't one until a few years ago. But slowly as I started experimenting many food and started understanding and liking food, I understood the importance of having a full tummy breakfast and the variety of option that we can have and make for a good brekkie ! There used be a whole year and a half in my life where I constantly had toasted bread with honey and nutella for breakfast ! I myself am surprised now at how I managed to have that same breakfast without getting bored :D

Now with my little one at my heels, I am in constant search for healthy, wholesome and quick to make breakfasts which is good and tastes great for both me and my little one's taste buds :) This is one such option. I bought the Jowar flour from Big Basket when they had put up an organic products sale. It is very easy to make them and very healthy too and my little one loves it (for now ;)). He has it as such without any sides but I like to spice them up with a gravy and this time I paired it up with some leftover Kohlapuri chicken from the previous day's dinner ;) So if you are like me and would like to try new healthy breakfast options, here is the recipe for you :) 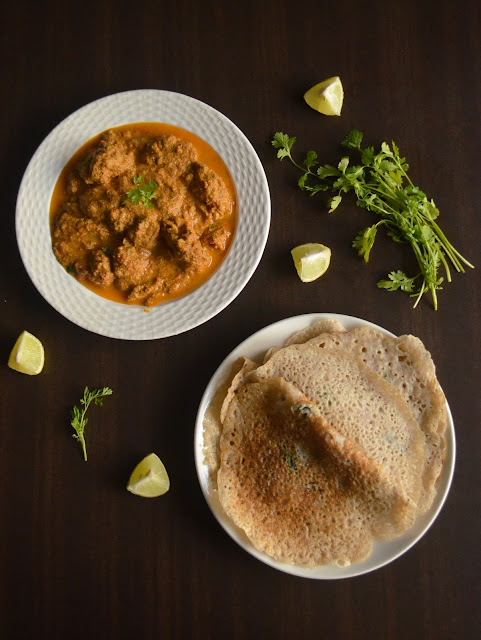 2. Add water and make a thin batter. The batter should be watery like that for rava dosa or neer dosa

3. Heat a dosa griddle or pan. Smear a tsp oil and pour the batter. Add little oil along the sides and on top of the dosa. Allow it to cook

4. Then flip over the dosa and allow it to cook. Once cooked, transfer to a plate and serve hot 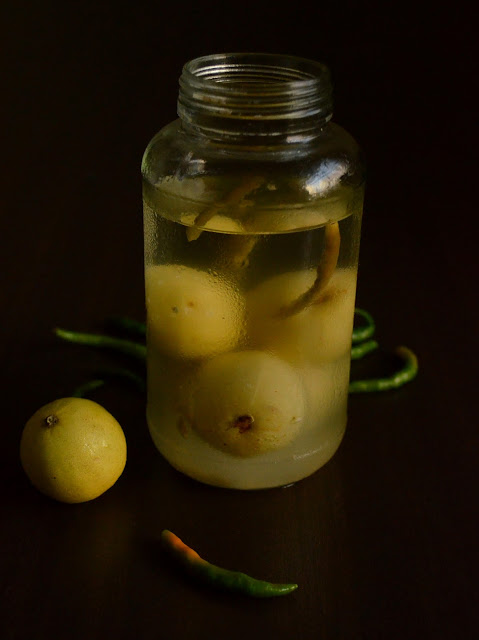 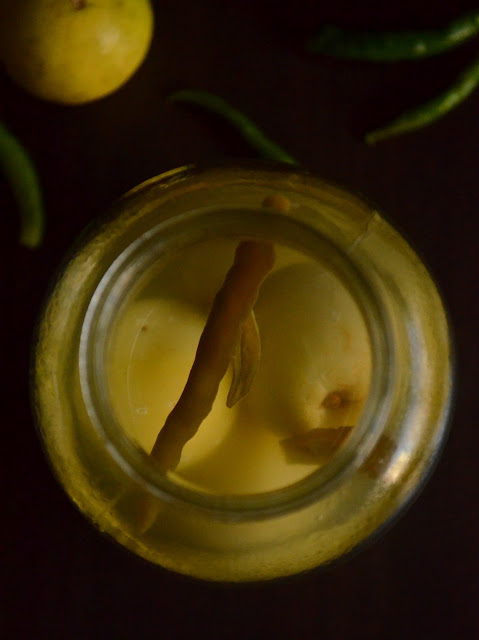 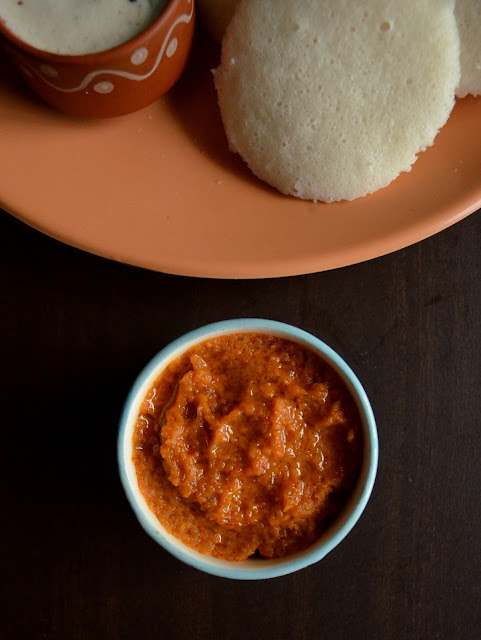 Are you a chutney person or a sambar lover when it comes to having idly and dosa? I'm definitely a sambar gal.. I have to have lots of sambar and the idly or dosa has to be nicely dunked in and soaked and made moist for me to devour.. ahh, the thought itself makes me crave for some sambar idly now :D But Deeps and my little one are more of chutney lovers. Even if sambar is there, they would need some chutney for their soul ;) So coming to today's recipe, it is a simple humble Onion chutney with the bare minimal ingredients that you can ever imagine to make a dish :D

This chutney is a regular at my mil's place whenever idly or dosa is made. And that would be in addition to a red or white coconut chutney and sambar. I make this with big onions but if you have a stock of shallots you can make it with them too or you can make half and half of onions and shallots. And if you are conscious about using oil, then no need to saute onions. Instead directly grind them with red chilly and add coconut oil. That also tastes yum. This chutney is really a time saver recipe and can be made very fast. And if this chutney is there I really don't mind even if sambar is missing from the menu :)

The other chutney recipes that might interest you are 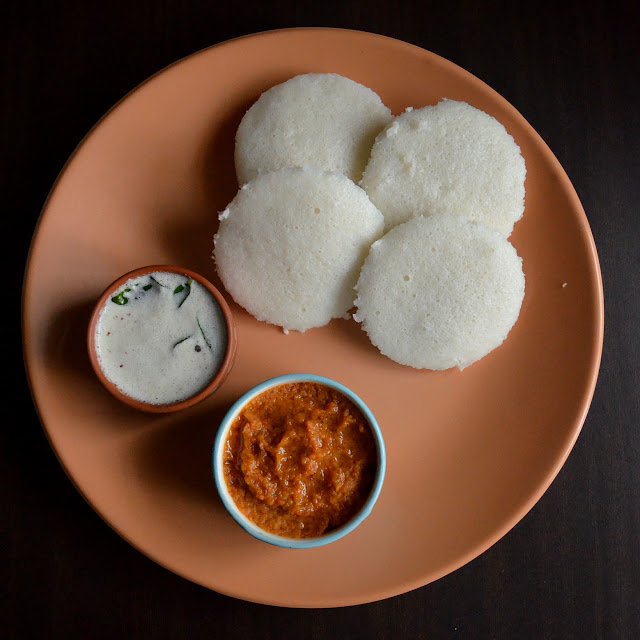 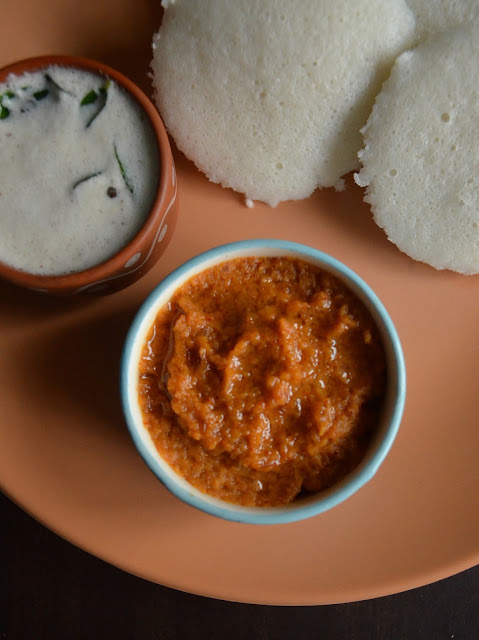 2. The onions should turn colour and become slight golden. Take care not to burn them. Now add the red chilly powder and saute for another 2-3 minutes till the raw smell goes off. Now switch off the flame

3. Allow it to cool. Once cool, grind them to a smooth (or rough depending on your preference) paste, preferably without water. If the quantity of onions is too less it will be difficult to grind, in that case add very little water

4. Transfer the chutney to a serving bowl. Add 1 tbsp coconut oil and mix

Serve with hot idlis and dosas ! 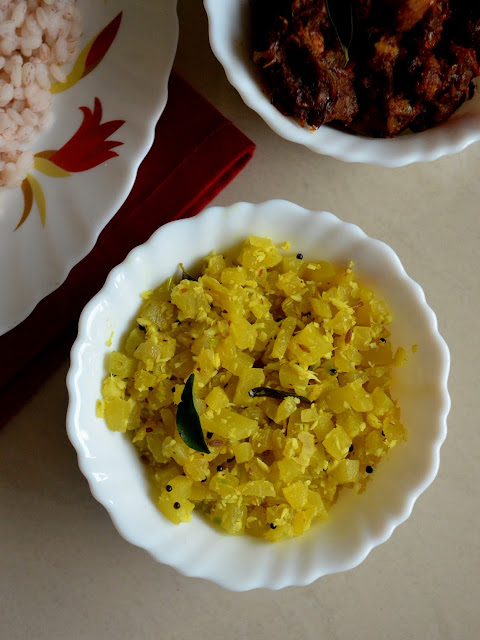 Today's recipe is a slightly different one friends.. Did you know that you can cook raw papaya as a veggie and make amazing dishes out of them? That's one beauty of growing up on the west coast of India in Kerala. You learn to make use of the leaves, stalks or the raw fruits and make varieties of dishes out of it. Most of the Keralites, at least the previous generation grow many fruits and veggies at home itself at their backyard and whip up tasty dishes out of those organic produce.

I have seen my mil make a very yummy gravy from the raw mango, jack fruit seeds and cucumber, all home grown ;) Usually during the morning ritual of cleaning (sweeping off the dry leaves and such) the front and back yards, whenever she comes across a fallen raw papaya or raw mango, she brings them inside to sneak them into the lunch and dinner menu for the day.. Cool right ;) So I thought I will share with you how to make a thoran (poriyal/stir fry with coconut) using this raw papaya. I also have another gravy type recipe using raw papaya. Will post that sometime later. For now, let's see how to make this easy and ready in a jiffy thoran.. 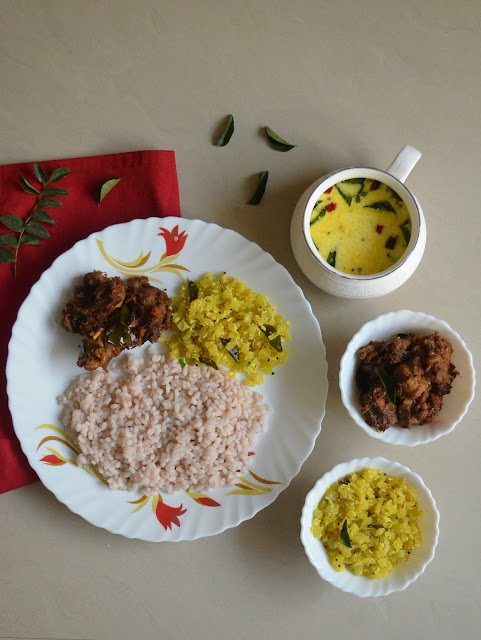 1. Scrape away the skin of the raw papaya and cut it into half. Remove all the seeds from and then rinse them well. And chop them very finely. If you have a food processor, go ahead and use it

2. In a pan, heat the coconut oil. Splutter mustard seeds and curry leaves. When it starts to splutter, add the chopped raw papaya along with ¼ tsp turmeric powder and salt. No need to add water. Allow them to cook covered in a medium low flame until done. Check in between to ensure that it doesn't get burnt or stuck at the bottom of the pan and give a quick stir. It should take about 10-15 minutes to cook

3. Now while the papaya gets cooked, coarsely pulse together the ingredients under 'To Pulse' in mixie without adding water. Do not grind to a smooth paste. Just 3-4 pulse until all the ingredients get crushed and mixed well would be sufficient.

4. Now add the ground coconut paste to the cooked raw papaya and and give a nice stir till the coconut tempering is coated evenly all over. Switch off the flame in a minute or two and serve

Serve along with brown rice, Sambar or pulissery and pappad and a non veg dry dish ! 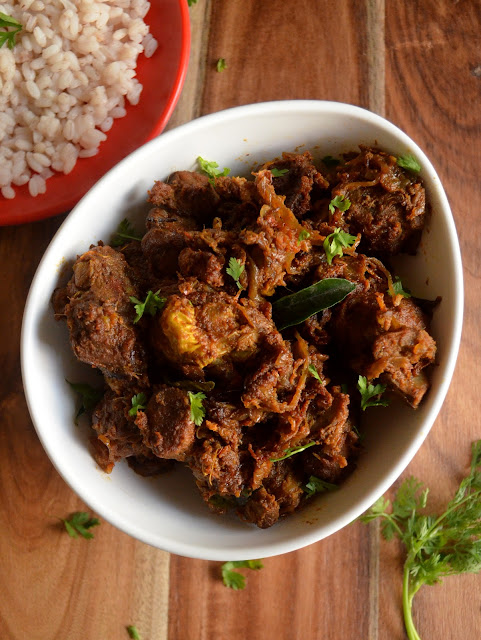 Hello folks.. How is the New year treating you? My year is so far good and going sort of ok! That means, I am atleast keeping up on half of my resolutions so far ;) My laptop was giving me a lot of trouble in the past 2-3 months and finally I have had it repaired and so the second task I wanted to do was to publish a post in this humble little space of mine. And the first one is to upload my little one's pics and take a backup of it somewhere safe ! I almost had a nightmare when my lappie crashed as I was scared that I would lose his videos. But thank God, I could recover them ! Some little crazy cute things that we hang on to in life na :)

So whoever knows me would know that I love chicken, both to cook and to eat and for me the first thing that comes to mind while deciding a menu for any celebration is to include a chicken dish. But today's recipe is not about chicken, it's mutton. This recipe is very easy one and can be done with the regular ingredients from your pantry and it is super tasty too. This is a hit in my family and Deeps goes ga-ga about this every time I make it and he always says it tastes as good as a restaurant style roast.. Now that's something that can make you both happy and proud right? So why you thinking further? Head on to the recipe and make some soon and let me know how you got appreciated for it :) 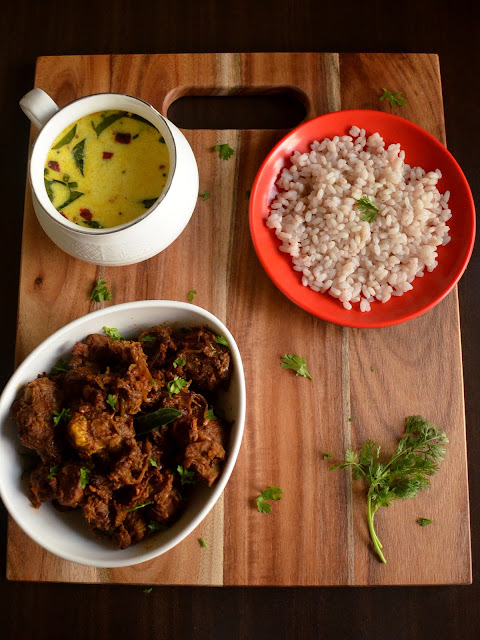 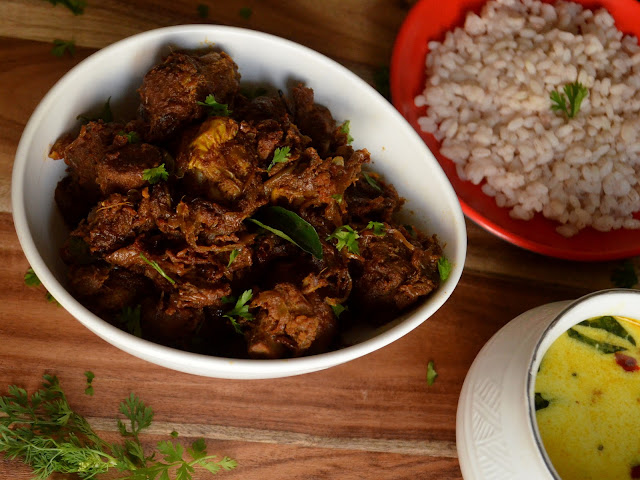