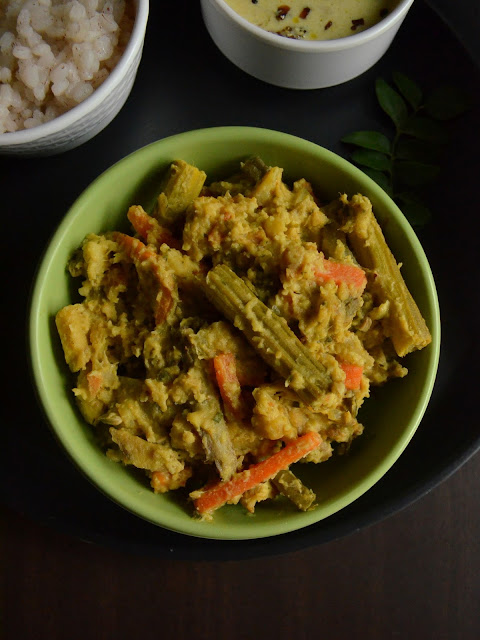 Aviyal.. The word literally translates to concotion or a mixture of different things! That's what this dish is also all about. It is a beautiful collection of different veggies cooked together along with curd and coconut. And it is a potpourri of all different kinds of taste like salt, sour, sweet and bitter.. Curd gives the sourness and a little bit of bitter gourd gives the bitterness.

According to Wikipedia, the origin of Aviyal is

'It is supposed to have been invented by Bhima (one of the Pandava brothers) during their exile. According to the legend, when Ballav (Bhima's name during this time) assumed his duties as the cook in the kitchen of Virata, he did not know how to cook. One of the first things he did was to chop up many different vegetables, boil them together and top the dish with grated coconut. There are mythological variations. Bheema is said to have prepared Avial, when there were unexpected guests for King Virata and he needed to serve meals for them. There was no sufficient vegetables to cook any single recipe for side dish, so Bheema used what ever available vegetables to make a new dish, which came to be known as Avial'

Different parts of Kerala cook this dish in a slightly different manner from one another. Some use cumin seeds while some don't. Some cook the veggies in curd whereas some add curd in the end. My version of this recipe is from my MIL who makes them in Malabar (to be exact, Nilambur) style. I am specifically saying that coz the Calicut version (which is just a 1.5 hour drive from Nilambur) has an entirely different taste ! And my fussy eater (when it comes to veggies) hubby doesn't seem to like any other version other than this ;) But I must confess, that this is one of the best aviyals that I have had as well. I have lived in many places in Kerala like Trivandrum, Kollam, Kottayam, Kochi, so I can very well vouch for this version ! And this is one dish that I actually look forward to whenever I visit Kerala :)

The key and the time consuming part of making this dish is cutting the veggies. All the veggies should be cut to equal lengths. And make it as thin as you can so that it cooks faster and blends in well ! During Onam, it seems that it was Deeps' duty to cut these veggies to perfection. And this is done on the night before Thiruvonam. Veggies are cut and kept ready for cooking the next day so that it is easier to finish off that big list of dishes for the Sadhya.. So let's move on to see how this lipsmacking traditional Kerala style aviyal is made ! 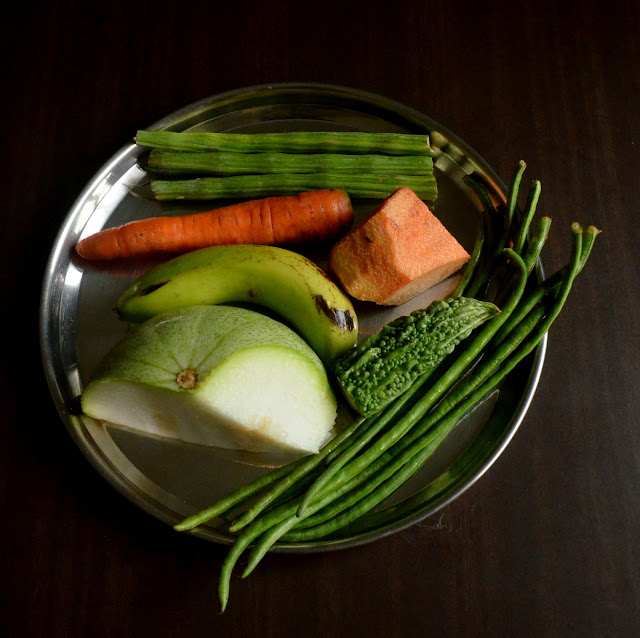 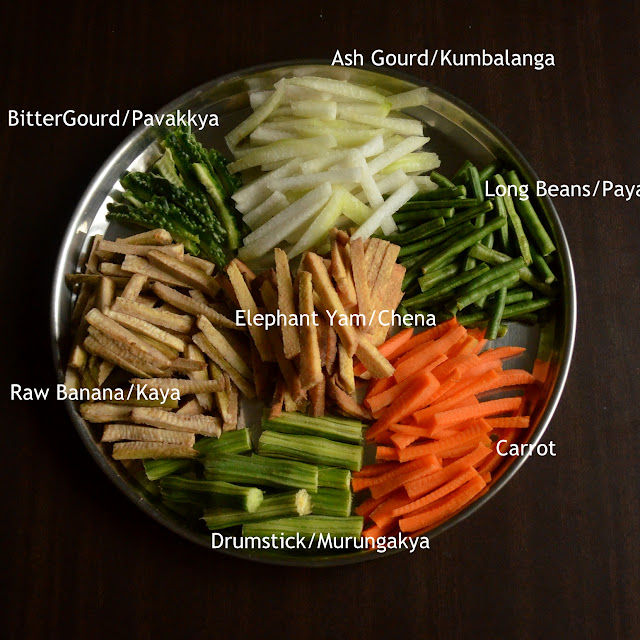 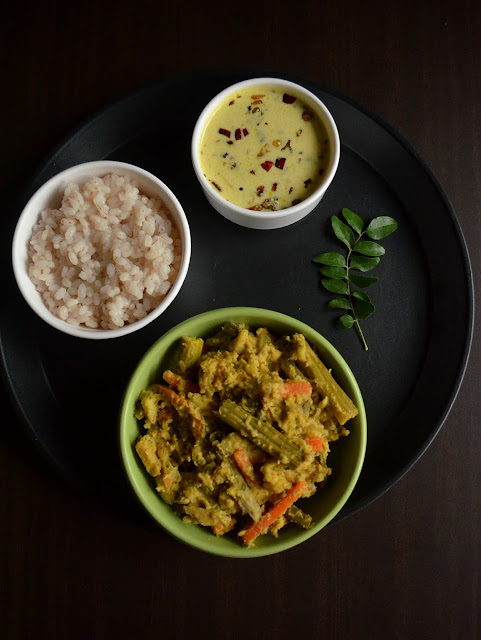 
1. Cut all veggies into thin slices lengthwise of approximately 2 inches of length. All the veggies should be cut to the same length. The thinner the better. It will get cooked faster

2. Now take all the cut veggies in a wide pan or uruli if using one. Add salt, turmeric powder and chilly powder and little water (approximately 1/4 cup) give a gentle stir

3. Allow it to come to a boil. Once the water starts boiling, reduce the flame and cover the pan and cook till the veggies are almost done. The yam and long beans take the longest time to cook. So the test is to check if they are cooked

4. Meanwhile grind together grated coconut, green chillies and curry leaves in a blender. Do not add water. It should not become smooth. 3-4 pulses should be enough

5. Now add whisked curd. Whisk the curd once using a whisk or give a quick pulse in mixie. If the curd has lumps it will be difficult to get it blended with the veggies

6. Cook uncovered till there is on water content. Now add the ground coconut and give a quick gentle stir. Leave for about a minute or two

7. Now add the coconut oil and curry leaves and give a gentle stir. Aviyal is ready to be served